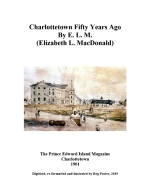 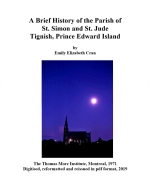 The Appearance of the Mi’kmaq

So far our only portrayal of what the Mi’kmaq looked like was in the Eighteenth Century engravings found in the travel books of the time. The people were Europeanised by being presented in the pose of the Apollo of the Belvedere, a Roman statue possibly from the time of the Emperor Hadrian. These engraved pictures, sometimes with outlandish vegetation, were created largely from the imagination of the artists, helped perhaps by descriptions written by the early explorers. So imprecise was their knowledge of what they were illustrating that the Mi’kmaq on the right is labelled “Acadian man” and not “sauvage” as you would expect. The artist was evidently unaware that Acadia was an amorphous area in the new world settled by French farmers for nearly 200 years. 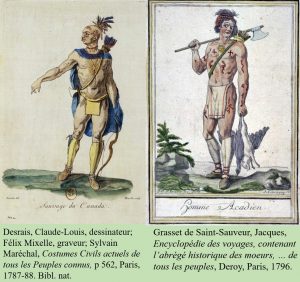 It was not until the Nineteenth Century, when the British were securely ensconced in Canada that artistic convention – still completely European in its origins – permitted a more believable representation of what the Mi’kmaq might have looked like in their environment. There were two kinds of artists likely to send back images from the New World. On the one hand there were the topographers who had been especially trained to capture accurate views of landscape, people and buildings, in the manner of military spies, which they often times were. The other artists were often middle class women and men who, as part of their education, received training in such civilised skills as music, dancing and painting. Some of them were very talented, some were even taught by topographic artists who had been trained to tell the truth in their art.

There are many paintings of the landscape of the New World and its people done in various media by topographers and amateurs, and they are a precious source of information about Mi’kmaq material culture. 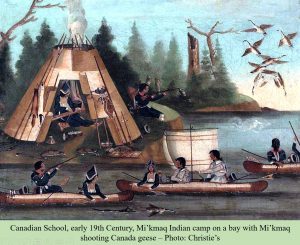 This oil painting, recently sold by the great art auction house Christie’s, is almost identical to the one in the National Gallery in Ottawa. We are given a cut-away view of the wigwam, showing a pot steaming over a small fire and a woman, wearing her typical “Phrygian” hat, embroidered with European glass beads, working on a project. In the foreground canoes, filled with men and women, are shooting and gathering geese. One of the canoes even has a small sail, something imitated from European examples of small sailboats. All wear highly decorated costumes. The dark blue English cloth such as worn by the military was greatly sought after, as was the scarlet cloth used to make other uniforms. The light-coloured outfits may be sewn animal skins also decorated with European trade good beads and braid. Military uniforms, with all their decorative braid and bullion, must have had an immense influence on the costume of the Mi’kmaq at this time as they began to adopt European styles of dress. This kind of embellishment would carry through into the Twentieth Century. 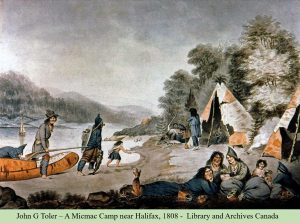 In a watercolour similar in composition and content to the previous anonymous oil painting, the artist John Toler shows a Mi’kmaq camp with hunters arriving, having been greeted by an excited child, while people work in the wigwam, or lounge happily on the shore, having a gossip. All appear friendly and happy, and so they were described by many travellers. 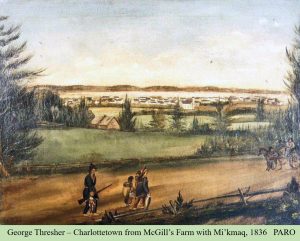 This is perhaps the earliest scene we have of Mi’kmaq people on Prince Edward Island. George Thresher was an English artist who travelled around the Eastern Seaboard of North America giving art lessons and decorating carriages, making shop signs and decorating churches. In 1829 he and his wife moved to Charlottetown where he produced some fine topographic works of Charlottetown and life in the countryside. This small oil painting owned by the Public Archives gives us a panoramic view of the city before Province House was built and the spire of Saint Paul’s Anglican church was erected. In the foreground a family of Mi’kmaq are walking along the Saint Peter’s Road, in the vicinity of McGill’s farm, going to sell game and fish they have caught at the market. They are dressed similarly to those portrayed in the two previous views. It is interesting to note that the artist chooses to give as the focus of the foreground, not Islanders doing their business, but exotic Mi’kmaq. Perhaps an Island artist, if there had been one, would not have included them, but to a travelled Englishman, they are worthy of notice in this British colony. 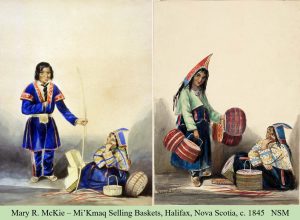 Mary McKie was another English immigrant to Nova Scotia and she did a series of brilliant watercolours showing the appearance, costume and accoutrements – in this case baskets for sale – of the local Mi’kmaq. Her paintings are very detailed and we are able to make out all sorts of interesting details. At some time in the past Mi’kmaq women had adopted a distinct headdress or hat that was often highly decorated. It covered the back of the neck and came to a high forward point at the front. Europeans – classically educated, naturally – called these “Phrygian” hats because they so closely resembled the headdress, known from ancient sculptures, of peoples who had lived in the Eastern Mediterranean area in Greek and Roman times. Of course, this helped enforce the myth of the Noble Savage, so popular in the Europe of the Enlightenment in the Eighteenth Century.

Mi’kmaq baskets and porcupine quill boxes were keenly sought after by visitors from Europe. For practical purposes the baskets would not be decorated except for variations in the way the strips of wood were woven. For special purposes however, the wood strips were dyed using natural dyes, and when available, dyes from Europe, to make some very handsome and bright artefacts. Many of these still survive, especially in British private collections, where they were brought home by administrators and the military as souvenirs,  and are eagerly sought after by Canadian museums. 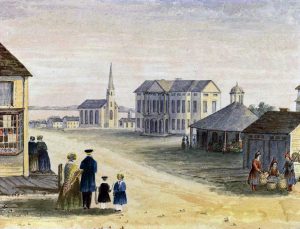 When Province House, the seat of the Island Legislature, was being built in the 1840s, an artist who has not been firmly identified did a number of paintings of the activities in Queen’s Square that show various stages in the final construction of the building. We can date these paintings because they were done during the time the north and south porticoes were being built as an afterthought to the original design. The compositions are similar but in the earlier ones the portico and its pediment have not been erected, only its base, and, as in the case of this one, the façade is completed. This gives us a date range of 1845-1848, with this painting coming at the end. This particular painting was sold by the auction house Christie’s several years ago. Other versions of this same view are to be found in both public and private collections in Charlottetown.

What makes this particular version of the scene most interesting is the presence, in the lower right corner, of a group of Mi’kmaq selling baskets. Here is a detail. 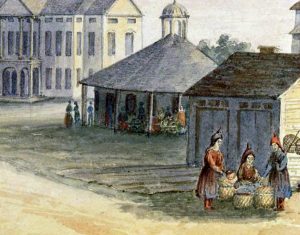 Note that they are not allowed to set up their display in the round market house just beyond, but have to position themselves next to what was probably the equivalent of a firehouse for the water pumps. They are good enough, once again, to be the exotic and colourful element in the foreground, but not good enough, it seems, to join the English colonists selling their wares on the veranda of the Market House.

The Birth of Photography

This painting brings us to the eve of the introduction of photography in Charlottetown, about ten years later in the late 1850s. A local surveyor and entrepreneur, Henry Cundall, developed a keen interest in the new phenomenon of photography and by 1860, a decade after this painting was completed, and probably provided us with the first known photograph of an Island Mi’kmaq. It, and the one following it, were found in a photo album from the 1860s kept by Helen Bayfield, the daughter of Admiral Henry Wolsey Bayfield who completed the great hydrographic survey of the Gulf of Saint Lawrence in the 1840s. The Bayfields retired in Charlottetown where they rented the Countess of Westmorland’s house on the corner of Queen and Euston Streets and owned a large, very interesting, late Georgian country house in Keppoch, which is still standing. Helen’s album seems to span the 1858-65 period and is filled with family photos, photos of Charlottetown and other parts of the Island, and photos of their travels in Quebec and Scotland. It is perhaps the single most precious treasure trove of photographs from the time of Confederation we have on the Island. It belongs to the PEI Museum and, now dismembered, is stored in the Public Archives. There are rumours – a legend? – that Henry Cundall and Helen Bayfield were romantic friends and that many of his photographs found their way into her album. This is quite likely. Among the photos attributed to Cundall is the first known photograph of a Mi’kmaq and a wigwam on the Island. Anthropologically, it is the most important photo in the whole collection. 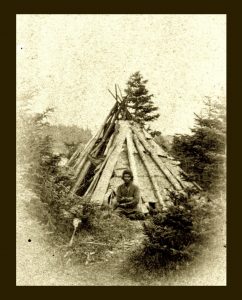 We see a Mi’kmaq man sitting in front of his wigwam which is built of birch bark and poles. We have made the move from painting to photography. It is a momentous time.

A second photo in the DuVernet Album as Helen Cundall’s collection is now called, is perhaps the earliest photo on the Island depicting cultural tourism. A man and two women have crossed over to the Rocky Point Reservation and have had themselves photographed with the natives who are very much not of their world. They are something to go and gawk at, perhaps even to giggle at, but certainly nothing to take seriously as an equal. 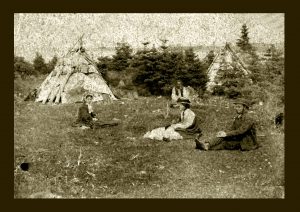 In the late Victorian Period and well into the beginning of the Twentieth Century increasingly one sees marginalised people as the object of curiosity and perhaps fun in the new market for postcards that was to survive as a booming business until the advent of digital photography and the internet replaced it with the “selfie” and other vulgar abominations.

Take for example this Rocky Point Mi’kmaq group from the beginning of the Twentieth Century. For the traveller, the postcard is a record of something unusual, and not at all part of your everyday world that you have seen in your travels. 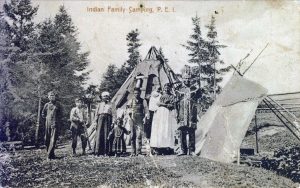 Not only the Mi’kmaq as marginalised people were treated in this manner. Vast numbers of cards showing black people in front of their cabins or working in the cotton fields were produced. 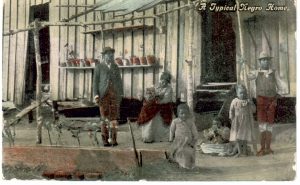 And to bring things closer to home, the Acadians, never understood by the anglophone community, and seen as some kind of odd remnant from the pre-Colonial past, were photographed in the same spirit as the Negroes and the Indians. These Acadians were from Palmer Road, near Tignish, and the photographer even published an account of his visit and the ‘treats” he gave to these strange people. 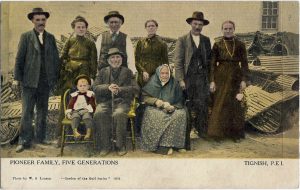 So the Mi’kmaq enter the popular consciousness through the medium of touristic communication. 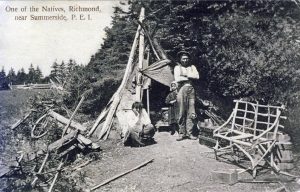 Black and white is not enough and when coloured postcards become available, older black and white images are colourised to increase their exotic quality. 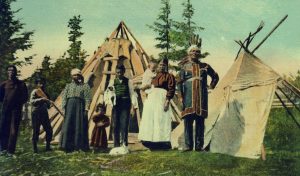 The Mi’kmaq in art have come a very long way, from the Noble Savage engravings of the Eighteenth Century to the modern, exact, unflinching and honest product of the modern camera. What a voyage! 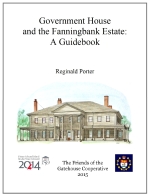 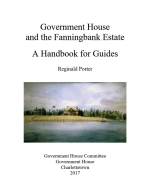 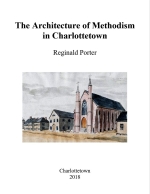 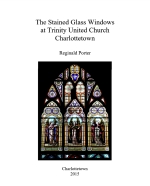 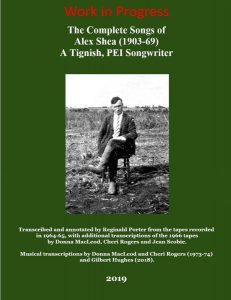